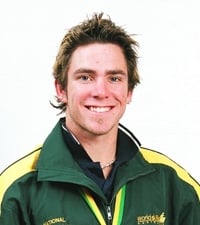 From a young age Simon Mudd’s mother told him ‘always try to be the best at everything you do’, for 21 year old Simon this advice has paid off. Simon’s road to success began whilst he was still at school, it was during a rural studies class that Simon discovered his passion for landscaping; it was a natural progression from school to an apprenticeship. Since walking away with the gold medal last May at 2004 WorldSkills Australia National Finals and gaining selection into the Australian team, Simon and Jonathan have travelled to Helsinki, Finland to compete against the world’s best landscapers. Leading up to the International Competition socialising and cars, two of Simon’s passions, had to take a backseat to training and hard work. After four gruelling days, Simon and Jonathan came 4th in the world and received a Medallion of Excellence. According to Simon, “competing against the best young landscapers in the world was an amazing opportunity and an experience I will carry for the rest of my life”.