To Ern MacDonald, who has been credited with changing the face of labour relations in the Australian construction industry, nothing was more important than recognising and encouraging the development of skills in young people.

Established by WorldSkills Australia, the Dusseldorp Forum and the MacDonald Family in 2006 in honour of Ern MacDonald, this fellowship aims to assist young tradespeople working in the building and construction industry to launch their careers.

The scholarship from 2006 – 2016 was awarded  to assist successful applicants implement their project plans. Past fellowship winners have used the scholarship funding to start their own businesses, travel overseas, invest in further study or implement innovative and sustainable projects that have assisted their broader community. 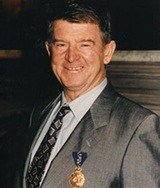 To Ern MacDonald, who has been credited with changing the face of labour relations in the Australian construction industry, nothing was more important than recognising and encouraging the development of skills in young people. It is fitting that this fellowship, established in his memory, assists careers of talented young tradespeople.

During more than four decades of work with Civil & Civic, the construction arm of Lend Lease, Ern MacDonald, alongside his mentor, Lend Lease Chairman Dick Dusseldorp, pioneered the revamp of work and management practices in the Australian construction industry. His commitment to treating working people with respect and dignity, to working with the unions to find common ground, and to sharing the benefits that flowed from that across the whole company by way of profit sharing and improved wages and conditions of work was widely recognised.

Ern MacDonald’s passionate commitment to skills development was a driving force in the creation of Group Apprenticeship Schemes through the ACTU-Lend Lease Foundation of which he was a foundation trustee. He was also a trustee of both the Dusseldorp Skills Forum and WorldSkills Australia.

For more information about the Ern MacDonald Fellowship visit dusseldorp.org.au