WorldSkills Australia   |   News   |   Where are they now? Plumber Grant Stewart

Where are they now? Plumber Grant Stewart 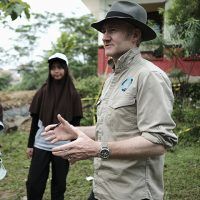 Grant Stewart always wanted to work in the building trades, with his father being a carpenter. He completed his apprenticeship with Master Plumber’s Apprentices Limited through W&S Robson in January 1996.

WorldSkills was a great starting point for Grant, who says “I didn’t have any real-life goals back then, just went where things took me. WorldSkills Australia  has taken me on a 20-year journey that you could write a book about, experiences and places that I could not have even imagined”.

Grant competed at the WorldSkills competition in 1997 and has undertaken many roles within WorldSkills since competing,from National Chief judge to International Chief expert in Plumbing and Technical Delegate Assistant  for Australia.

In the late 1990’s, Grant developed a strong interest in water and sanitation projects and the sharing of skills that continues throughout developing regions around the world. Now Grant is the Project Manager for the International Water, Sanitation and Hygiene Foundation (IWSH). Grant works on developing and managing the foundations’ projects including the Community Plumbing Challenge.

Grant believes to be successful in any trade; you must have passion and a sense of adventure.