The outstanding performances of the 2017 Skillaroos and their Experts at the 44th WorldSkills International competition in Abu Dhabi successfully propelled WorldSkills Australia into the top 10 skill nations in the world.

Team Australia and the Skillaroos placed 10th on average medal points in a competition of 59 countries, beating our previous ranking of 15th after WorldSkills Sao Paulo 2015.

The last time Australia performed at this peak level was at the 41st  WorldSkills Competition in Calgary (Canada) in 2009 where Australia came 5th on average medal points. To return to the top 10 position in the world was the primary goal this year, and we as an organisation are delighted it has been met. The top 10 countries after this year’s International competition are China, Switzerland, Korea, France, Brazil, Austria, Chinese Taipei, Italy, Liechtenstein and Australia. 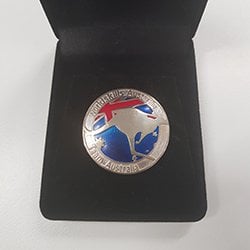 Designed by Darren May Expert for Jewellery and produced by our Gold partner Pallion, the medallions are a way of acknowledging the special honour Competitors and Experts have experienced as being part of Team Australia, and allow others both within and external to the organisation to know upon sight who has represented their country at the most elite level.

The kangaroo and Southern Cross design makes these medallions uniquely Australia. The medallions are also personalised for each recipient, engraved with the skill name and number from the international Competition.

It is now planned to present this medallion to past Skillaroos and Experts, to ensure that our champions are recognised historically as well as into the future.

The achievements of the Skillaroos and Team Australia goes far beyond the successes of this year and this iteration of the international competition alone. The outstanding efforts of these young people and their trainers are instrumental in demonstrating Australia’s skill mastery on the international stage, and in amplifying the importance the VET sector plays in building our nation’s strong future.

In 2014–15, the Australian Bureau of Statistics valued exports from international education at $18.8 billion, making it Australia’s third largest export. According to the Commonwealth Government Department of Employment, the VET sector currently provides training courses for 9 out of 10 occupations predicted to have the greatest growth of new jobs over the next five years. This shows that VET is more relevant than ever when it comes to preparing Australia to be more globally competitive.

The sectors where job growth projections up to 2020 are highest are in: health care and social assistance, professional, scientific and technical services, education and training and retail trade. This means that the jobs of the future will require a more diverse set of skills, including creativity, problem solving, patience, critical thinking and resilience – all things that WorldSkills is determined to be at the forefront of encouraging and developing in the VET sector.

Most recently, the annual National Student Outcomes Survey from the National Centre for Vocational Education Research (NCVER) showed students overall recognised the benefits of their VET courses. The NCVER statistics show overall the number of apprentices taking up training has increased in the past 40 years, growing from 134,700 apprentices in training in 1976 to 176,100 in 2016.

With the future of VET in Australia looking bright – and necessary – it is more important than ever to have our best foot forward on the international stage.

Our Partners in Abu Dhabi 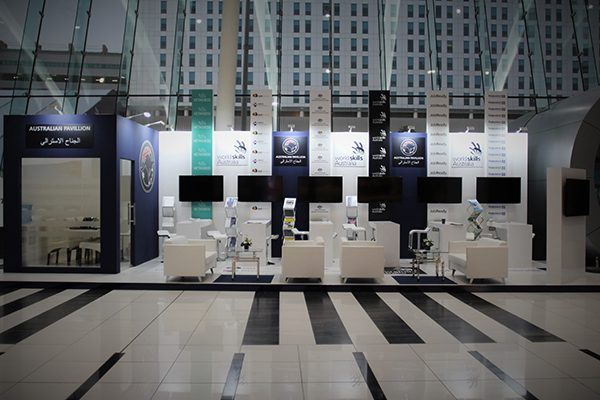 For the first time, WorldSkills Australia hosted the ‘Australian Pavillion’ as part of the WorldSkills 44th Competition at the Abu Dhabi National Exhibition Centre to compete in over 50 trades and skills.

WorldSkills Australia’s objectives for this project were to provide a one stop shop for the key decision makers and influencers from the world’s VET sectors and showcase Australia’s pow
erful VET offering.  Education of foreign students is one of the top 5 contributors to Australia’s GDP. Coupling this with the fact this pavillion was at the world’s largest and most successful VET excellence event, with the majority of the world’s VET marketplace coming together under one roof, this was a critical activity designed to bring together Australian organisations who are key influencers in the Australian VET sector. Four Partners including VETASSESS, Job Ready, TAFE Directors Australia and Federation University joined WorldSkills Australia in Abu Dhabi to make new connections within the international VET sector.

“Sponsoring and exhibiting as part of the Australian Pavilion at the WorldSkills International competition in Abu Dhabi provided VETASSESS with an invaluable opportunity to connect with key TVET leaders and decision makers from around the world.

The event was not only an excellent opportunity for networking on the world stage but also an opportunity to showcase VETASSESS’ reputation in the international TVET sector. The event exceeded our expectations and we managed to secure a number of partnerships while we were there giving us a very clear return on investment.”

“Having never experienced WorldSkills International competition, I was cautiously optimistic about the experience. And, having the opportunity to participate in the Australian Pavillion hosted by WorldSkills Australia, I felt that I’d been fairly well set up to succeed. I can honestly say it exceeded all of those expectations. From the design, logistics and communication, to the exposure and networking opportunities, the Australian Pavilion was an incredible success. From a commercial standpoint, the ROI is easily measured and justifies JobReady committing to this again in 2019. And personally, I had a bloody great time with some truly wonderful people.”

“The Australia Pavilion at the WorldSkills International competition was a great opportunity to showcase Australian VET education and meet delegates from over 60 participating countries. The atmosphere of the competition created excitement that created the basis for exchange of ideas, ethos and practice. TDA were looking to raise awareness of the World Congress of the World Federation of Colleges and Polytechnics and the exposure created through the Pavilion was extensive!”

“It was a pleasure to be a part of the delegation representing Australia at the recent 44th Worldskills International Competition in Abu Dhabi and spending time at the Australian Pavilion. The pavilion from an atheistic point of view looked very professional with a strong Aussie branding presence. The group that worked in a coordinated manner disseminated a range of information covering, vocational training opportunities, Australian VISA criteria for study, University and higher education opportunities, student management software products to the promotion of the VET World Congress scheduled for October 2018. My overall experience was nothing but positive working with a great group of diverse but engaging colleagues with vast knowledge and capabilities. This was complimented with the ability to, at different stages, visit and view the competitions in action.”