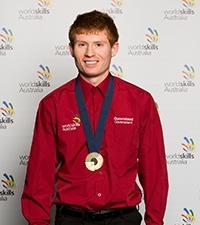 His work experience in the UK will be split between a wholesale/retail bakery and a smaller one that is focused on sourdough, where he hopes to learn new techniques and more about European-style breads. He has planned a trip to the Puratos Sourdough Library in Belgium after his UK experience, where sourdough cultures from around the world are kept alive. He is passionate about long fermentation breads and his craft, as demonstrated by his commitment to the WorldSkills competition.

“To compete at a national level for WorldSkills requires a lot of training. So much sacrifice went into winning my gold at the Nationals. I would train for five hours before work, then work for 8-10 hours, and did that seven days a week for about four months. It was worth it.”