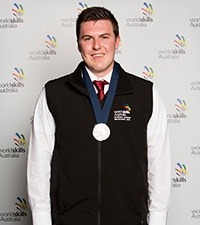 Jackson began an electrical apprenticeship in 2013. This is after acquiring a certificate III in IT in 2011 and a subsequent position with Apple; he is planning a career in robotics and is doing everything he can to develop his experience and knowledge in the area. When he returns to Australia he will study mechatronics, and he hopes to do a double major in medical science as well.

“I find I work better under pressure, so the pressure of the WorldSkills competition worked in my favour. I didn’t have time to second guess myself. It was quite thrilling and relieving to hear my name called; I didn’t think I would win!”

This will be Jackson’s first time in Europe. He is excited to be working with a construction company in London working on the electrical side of new developments. Most of his current experience is in industrial electrics, so he is keen to further his construction and residential experience which he anticipates will broaden his knowledge base in robotics.