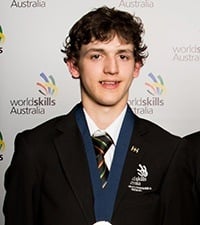 Zac began his apprenticeship in Mechanical Trade Engineering in 2014 because it was the trade that would take him closest to learning the skills he needs for his major passion – gun smithing.

There is no training specific for gun smithing in Australia, so Zac hopes to secure a placement in the UK where he can learn gun making and gun smithing. In the future, he’d like to set up a business in Australia maintaining and producing quality custom firearms and Australian-made guns.

“For the Engineering Team Challenge I had to make a hammer crane, together with a welder. I trained every night for eight months. I made the parts five or six times over, every component, to see if I could do it faster and better. We made the crane in the three days of the competition. It was a lot of work to fit into three days.”

This was Zac’s second time as a WorldSkills competitor. The first time was in 2014, with VET school, when he won gold. This time we got a silver. Zac is planning on competing again in 2017; he has already put his name down for the regionals.