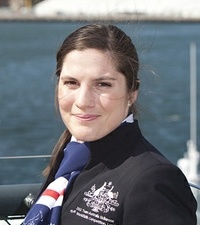 “Before WorldSkills, I was hesitant to take on certain jobs because I was unsure of whether I had the necessary skills. Now I consider myself a freelance fashion designer and dressmaker. I am working on more complex and couture garments that I would not usually attempt. I really enjoy the challenge and the satisfaction of completing a garment that I did not think was within my capabilities.”

Rhaman first became interested in fashion design when she was in high school. The first garment she designed was a dress made out of casino cards. Bitten with the bug, from there she started to make more clothes. In Year 12 she had to choose between going to TAFE to pursue her passion for fashion or move to Canberra to join the Defence Force and study at the Australian Defence Force Academy, which she had won a scholarship for. With much deliberation she decided that she wanted to see how far she could make it in fashion and started TAFE a few months later, “it was one of the best decisions I have ever made.”

Rhaman believes starting a trade has given her many worthwhile skills and as well as providing her with new professional avenues, “it is such a rewarding career choice.”

Of WorldSkills Australia, Rhaman says “it is such a great competition that brings out the best in everyone. I have gained so much from the competition and have been provided with many invaluable opportunities.”

Rhaman enjoys the whole process of her job, “designing a garment and then being able to make it into something that people can wear and more specifically want to wear is really satisfying.”

In the short term Rhaman would like to develop her skills as much as possible. In the long term she would like to start her own clothing line and have it stocked in stores both nationally and internationally.

Donna runs a successful business producing made to measure bridal, evening and daywear for clients. The business was established shortly after winning a Silver and then a Gold Medal at the WorldSkills National Competition 16 years ago. She has Designed Projects and Judged at many WorldSkills events since and believes that continued skill development is what keeps you at the top of your field. She would like Rhaman and the Skillaroos to remember that “no matter what the result, qualities like commitment, perseverance and pursuing excellence bring their own rewards – and they last a lifetime.”