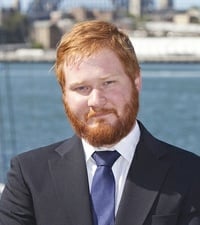 “WorldSkills Australia has helped me greatly. It has shown me how to deal with stress in any situation whether that is on the job or in my personal life.  Professionally WorldSkills has assisted me with becoming full time employed as well as gaining recognition from my employer.”

Liam took an interest in electronics through a friend who was completing an apprenticeship in the trade and recommended for Liam to look at a similar path.  He decided refrigeration would be his path. According to Liam, working in a trade has “helped him grow in confidence and has helped him to develop his personal interests.”

Liam would highly recommend participating in WorldSkills Competitions as he believes the “experience is invaluable.”  Liam believes the competitions have helped him tremendously with confidence and to further develop his skills.

In his job, Liam likes the variety of equipment and job sites he gets to work on, “no one sight is ever the same.”

At the WorldSkills  International Competition London UK 2011, Liam is looking forward to the opportunity to test his skills against the rest of the world and expand his knowledge in the field.

In one word describe how you feel about representing Australia in London?
Ace

Chris MacDonald is the NSW Refrigeration and HVAC Manager for City Facilities Management who work exclusively for Coles Supermarket in Australia. He has 16 years industry experience in all facets of the refrigeration and air conditioning trade. Chris has been with WorldSkills Australia since 1998 when he competed in the WorldSkills International Competition Montreal Canada 1999. He won a Gold Medal in Refrigeration. Since competing Chris has been involved in Judging, Competition Design and competitor training at various levels of competition. Chris is looking forward to being able to contribute to both the Skillaroos and the International Competition and is looking to bring a fresh perspective to the category of refrigeration. His advice to the Skillaroos is “be prepared, you only get one opportunity.”