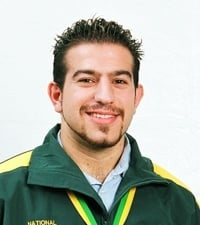 Anthony’s attitude in the lead up to the competition was positive, “If I train my hardest coming up to the comp and give it my best shot in Helsinki, then I will come away happy knowing that I did the best I could do.” This attitude attributed to Anthony being awarded a Medallion of Excellence which placed him in the top 10% of his category. Following on from Anthony’s success in Helsinki, he recently was announced as the recipient of the inaugural Ern MacDonald Fellowship. Ern MacDonald was a highly successful and respected member of the construction industry and a Board Member of WorldSkills Australia. The Dusseldorp Skills Forum and WorldSkills Australia developed an Ern MacDonald Fellowship in recognition of his support for the skill and personal development of young people. Anthony plans to use the $15,000 grant to set up his own small business, after completing his course in Wall and Floor Tiling at the end of the year. He also wants to pass on some of the skills that have earned him a swag of awards and citations for excellence during his training.