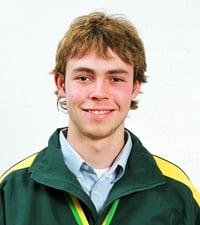 It was whilst Jarrad was still at school that he stumbled across his chosen career, Jarrad had always had an interest in computers and when he was offered an apprenticeship at the end of Year 10, he jumped at the opportunity.

Jarrad entered and won his Sydney regional competition and found himself on a plane to Brisbane to contest the 2004 WorldSkills Australia National Finals. After 3 days of intense competition Jarrad won gold and the right to represent Australia at the 38th International WorldSkills Competition in Helsinki, Finland.

Jarrad completed the intense four day competition in Helsinki and was awarded the Gold Medal and the title of being the world’s most outstanding young Web Designer. Jarrad was also awarded the Best In The Country by scoring the highest score in the competition for the Australian Team.

Jarrad says “winning gold is a once in a life time opportunity. Competing in an international arena for your country is not something everyone gets a go at….I was so proud to represent Australia%22.  Jarrad credits his success to the positive attitude he applies to his life and the support he receives from his family, friends, girlfriend and his TAFE teachers at Hornsby TAFE.

Jarrad now runs his own design agency – Jala Design – whilst passing on his talents to future designers by teaching design skills at TAFE. He continues his involvement with Worldskills as a National Judge and International Expert.

Book an Australian Apprenticeships Ambassador. Send a request for Jarrad Langdon to share their success story at your event or activity.