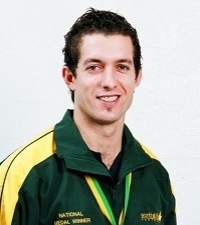 Romano%27s love of the outdoors and his passion to follow in his father%27s footsteps led him to a career path in Bricklaying. Romano has found his trade career very satisfying and finds the challenge of, %27ensuring that my work remains at the highest standard possible%27, and the driving force behind his success %27You can do anything you put your mind to.%27 It is with this motto that Romano found his inspiration to gain an International Certificate of Participation. Romano is a shining example of determination and success and serves as a proud ambassador for Australia.