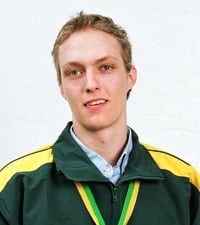 Michael’s love of drawing and his natural creative flair led him to his chosen trade. It was whilst undertaking work experience at high school that Michael found his natural talents were perfectly suited to a career in the graphic design industry. After winning his regional competition Michael flew to Brisbane in May last year to compete against other young graphic designers from across Australia at the WorldSkills Australia National Finals. Michael was successful in Brisbane walking away with a National Gold Medal and gaining selection into Team Australia. Leading up to Helsinki Michael was training hard with industry expert Jane Stokie and gaining invaluable advice from Sarah Jones who won gold in the graphic design category at the last International WorldSkills Competition in St Gallen, Switzerland in 2003. “Spending time with Sarah was an integral part of my training for Helsinki, both in terms of skills and in helping me with my mental preparation for the competition.” After four days of competing against the world’s best graphic designers, Michael was awarded a Medallion of Excellence, which put him in the top 10% of his category.