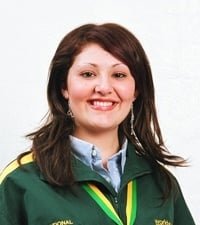 Rachel is a keen advocate for a trade based career and her advice to other young Australians considering an apprenticeship is, “…you have no idea, where it will take you! If you put in 110% you will get it all back”. After winning gold at the National Finals, Rachel gained selection to represent Australia at the 38th International WorldSkills Competition.

In May Rachel traveled to Helsinki is Team Australia and competed against some of the best young hairdressers in the world. After four days of grueling competition, Rachel received an International Certificate of Participation. Post Helsinki, Rachel hopes to continue learning and increasing her skills, she plans to either open her own salon or become a TAFE teacher after finishing her training.