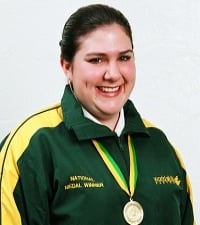 Rebecca was encouraged by one of her TAFE teachers to enter the regional WorldSkills Competition. After winning her regional competition Rebecca then represented the Hunter region at the 2004 WorldSkills Australia National Finals held in Brisbane. At the National Finals Rebecca fought off intense competition to win gold and gain selection to represent Australia. Rebecca describes herself as “enthusiastic and ambitious”. It is Rebecca’s enthusiasm and ambition that drives her to succeed. Rebecca credits her successes to, “hard work and dedication and perhaps a little bit of luck.” Rebecca’s attitude and commitment in preparation for Helsinki was always positive, “There is a lot of hard work ahead of me but I am more than willing to tackle my training head on and give this opportunity all I’ve got.” And that is exactly what she did. Rebecca walked away for the international competition with a Medallion of Excellence which put her in the top 10% of her category. According to Rebecca, “competing in the International Competition was an unbelievable experience! I met so many great people, made many new friends and learnt so much, both about myself and my skills. I have gained so much more confidence and direction from competing in the International Competition, plus I also had the opportunity to see a part of the world I never thought I would. It was an absolutely life changing experience!” Rebecca hopes to continue learning and increase her successes in the IT field now that she has returned from Helsinki.