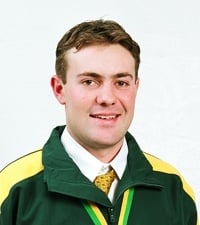 Wesley Foster comes from a family of champions – his uncle is world renowned wood cutter David Foster. Wesley begun his career almost be accident it was whilst still at school that he was offered an apprenticeship in painting and decorating and jumped at the chance to leave ‘school and get stuck into the workforce’. Wesley travelled to Brisbane in May 2004 to compete at the WorldSkills Australia National Finals, where he walked away with a gold medal and the right to represent Australia. Over the past 9 months leading up to the International Competition, Wesley put his other passions for footy and hobby farming on hold to concentrate on training and increasing his skill in the lead up to Helsinki. After four days of gruelling competition, Wesley was awarded a Certificate of Participation and became one of the top 20 Painter and Decorators in the world.