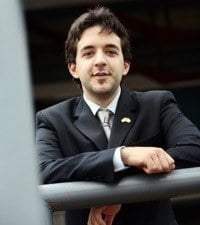 Anthony is from the Ballarat/Wimmera region of Victoria. His employer is Advanced Cabinetry and he trained at the University of Ballarat. Anthony%27s expert for Cabinetmaking was Jason Hindes from JF Hindes Cabinet making.

Anthony said that applying for an apprenticeship was the more practical choice because he loves working with his hands. He believes that a trade can suit anyone%27s interest.

Anthony achieved great success before even completing his apprenticeship. He was part of the WorldSkills Australia team that travelled to compete in the New Zealand National SkillEx Competition in September 2006. He returned home with a gold medal in cabinetmaking.

Anthony says that WorldSkills has helped him to be a perfectionist in cabinetmaking and improve his skills by focusing on the minor details of his work. The highlight of his job is to see a finished piece that he built with is own hands. He hopes to soon start up a business and employ an apprentice.

Anthony returned home from the International Competition in Japan with a Medallion of Excellence.