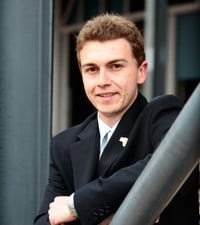 Joshua’s interest in manufacturing grew when he was in secondary school and he has since completed certificates 3 and 4 in his trade. He believes that taking up a trade is the best opportunity to pick up new skills that can be used to build a career.

Joshua has competed in both Turning and Computer Assisted Machining categories at the WorldSkills competitions and now represents Australia in the Manufacturing Team Challenge.

Joshua enjoys being able to produce something from a blank piece of material and, as he says, turn it into something that has a definite, useful purpose.

Joshua and his MTC team mates were awarded the Medallion of Excellence for their performance to design and manufacture a wind generator.