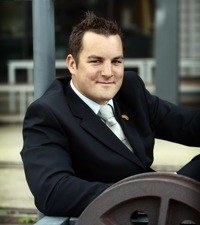 Rohan was encouraged to consider a trade career by his careers advisor at secondary school. He contacted Group Training Australia who helped him decide what he wanted to do and applied for an apprenticeship in Landscape Gardening.

Rohan’s passion for the industry is driven by the ability to be creative and active in an outdoor environment. He loves being able to work on ever changing projects and different locations which eliminates any routine and presents new and exciting challenges every time.

Rohan recommends being a part of the WorldSkills competitions just for the experience, if not for anything else. He says that you learn so much more than just how you measure up against the best.

Rohan has since completed his qualification and thinks he would like to own a successful business himself.

Rohan returned home from the WorldSkills International Competition in Shizuoka, 2007, with a Medallion of Excellence. This was awarded to Rohan and his team mate Simon Buchanan after their 4 days of intensive competition.