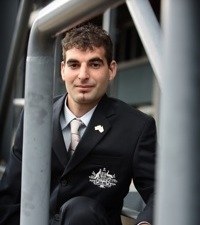 John is from Western Australia. He is self employed in Stirling and trained at SWAN TAFE in Balga. His category expert was Ron Barrett who works at South Western Sydney Institute of TAFE.

John has always had an interest in the tiling trade, so he went to see what his local TAFE could offer, and it grew from there into an apprenticeship.

He is now self employed and said he would definitely hire young apprentices to provide them the opportunities that he has pursued. John believes that a trade that can provide excellent hands on skills and industry knowledge can ensure a great living made.

For John, the most satisfying part of his job is walking into an empty room, and walking away with a finished product that he knows he has created to the best of his abilities.

John’s training and skills were awarded at the WorldSkills International Competition in 2007 when he received a Medallion of Excellence in Wall and Floor Tiling.