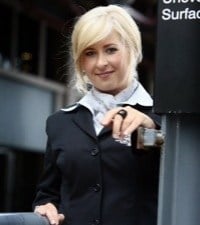 Holly is from the Hunter region of New South Wales. Holly was working and training at the Cairns Beauty Academy with her trainer and principal, Sue Collins. Holly was also a student at Hunter Institute of TAFE.

Holly first entered the WorldSkills Regional Competition in Hunter in 2005 where she won a gold medal. Her success has since escalated.

Holly won a bronze medal for the Beauty Care category at the WorldSkills National Competition in Melbourne 2006. Since then she has received the prestigious title of Hunter Regional Apprentice and Trainee Awards’ Apprentice of the Year for 2007. Holly’s qualifications include distinctions in Makeup Artistry and Nail Technology as well as a completed Certificate 4 in Beauty Therapy.

Holly enjoys working with people and making her clients feel better about themselves. Holly believes that her experience with WorldSkills has given her the opportunity to be the best she can be. She hopes to own her own a successful salon in the future and to also teach at TAFE.

Holly returned home from the 2007 WorldSkills International Competition with a Medallion of Excellence.

Where is Holly now?
Holly Browne has been bitten by the travel bug since competing in Japan, she said that “When I returned from Japan I realised I was ready to see the world; I had a great urge to travel, see new places and meet new people. So a few months later I made a big step in my life and I moved to London. I found a job in a beauty salon just outside of London and worked there for 3 months. I decided I wanted to concentrate on travelling Europe which meant taking a break from beauty therapy. I am still living in London and have been for 9 months now, however as soon as I earn enough money I want to jet off to another country for a week or so! I love it!”

“Not only has WorldSkills changed my life but it has changed me personally as well. It has given me the confidence to strive for what I really want in life, which at the moment is to see the world. I am living abroad which is something I never thought I would have the confidence to do by myself before WorldSkills.”
Holly (along with Courtney Barton and Candice Faranda) attended the 2008 WorldSkills Youth Forum in Vienna and found it to be an inspiring experience- meeting other people from around the world passionate about WorldSkills and keen to bring about change.

And in the next 12 months…
“The next 12 months of my life will involve moving on from London to another country as my working visa will expire and with that will come new adventures to look forward to!”

A few words for the competitors of Team Australia, Calgary 2009
“My advice to the new Team Australia would be prepare yourself for an absolute journey of a lifetime. The WorldSkills experience will change your life! It certainly has mine! Just remember to enjoy yourself, that’s really important! I’ll be there in Calgary cheering you on! Keep training.”