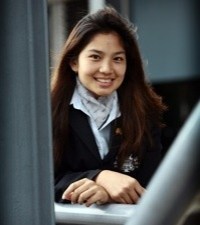 Suwanna is Australia%27s 2007 international bronze medallist for her performance at the WorldSkills International Competition.

Suwanna is from the Sydney region, New South Wales. She currently works at the Four Seasons Hotel in Sydney and trained at Ryde TAFE, Nothern Sydney with expert and 2007 Trade Teacher of the Year Marion Fitzpatrick, who also works at Ryde TAFE.

Suwanna grew up in the kitchen since a very early age, attributing her career path to her parents%27 influence. During HSC Suwanna attended various courses at Ryde TAFE and was offered an apprenticeship at the Four Seasons upon completing secondary school. Since then Suwanna has received the Oliver C Shaul Scholarship and won a gold medal at the New Zealand SkillEx Competition.

She loves everything involved in a typical day of work down to the smallest things; whether it be turning baby carrots for an hour or improving her knife skills.

Suwanna says that WorldSkills Australia is the best thing that has ever happened during her apprenticeship after her TAFE teachers encouraged her to enter. She wants to dedicate her time to teach other apprentices, but in the meantime, continues to keep herself motivated, active and learning as much as she can.