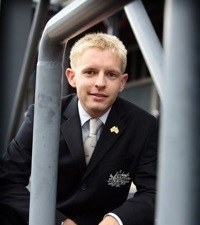 Chris is from the Brisbane region, Queensland. He is employed at Duce Joinery in Bundamba and trained at SkillsTech Australia. The Joinery expert was Steve Bulman from Westside Joinery.

After completing year 12 Chris wanted to get into a trade that would have a recognised qualification and would allow him to construct with his hands. His path through an apprenticeship seemed like the most practical pathway. He has since completed his Cert III in Offsite Construction.

Chris believes the skills learnt through a trade can help him not only in his work but also in day to day life. The highlight of his work is to be able to work to the highest standards and constructing a tangible timber product with his own hands.

The experience as a WorldSkills competitor has given Chris the window to learn new skills that can lead him to other avenues of employment and opportunity.

Chris says that meeting new friends while gaining skills through each stage of the competition is what he values and will make him an employable worker. Chris wants to learn and experience new things so he can offer his knowledge to people looking for a trade.

Where is Chris now?
Chris has remained loyal to his employer Duce Joinery who supported him throughout the entire WorldSkills journey and throughout his apprenticeship. “In the last 12 months I have moved as high up as I can without being in the office and remain working with the timber.”

Chris has been invited to give motivational speeches and has a new found respect from fellow employees and is happy to report that “Life is working well, which is a good thing compared to before leaving for Japan.”
The next 12 months could see Chris in uniform, as he has applied to the Queensland Fire and Rescue Service.

A few words for the competitors of Team Australia Calgary 2009
“Work hard and hold onto your family and friends during this testing period and use the support of the team leaders and fellow competitors. It will get hard at times and some of you may feel like pulling the pin but stick it out. It is a worthwhile journey.”