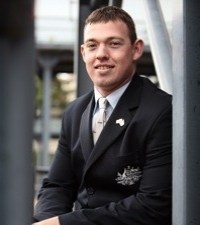 Mark comes from the Macquarie region, New South Wales. He is currently employed at Shanks Trailers in Dubbo and trained at Western Institute of TAFE with Welding expert Paul Condran from BlueScope Steel.

Mark was exposed to the welding industry in year nine during a Vocational Education and Training course, delivered by his local TAFE. He says that he loved it immediately, the first time he struck an arc. His interest in welding grew from there and he pursued a welding apprenticeship.

Mark loves being able to see the result of his hard work in the form of a tangible and useful object that will benefit others.

He would recommend everyone participate in the WorldSkills competitions because there is so much that can be learned from trade experts and fellow competitors. Mark believes that his exposure to industry members and past competitors has helped him gain an advantage on other young people in the industry.

Mark hopes to become a foreman or set up his own business. Either way he looks forward to sharing his experiences and ever growing industry knowledge with others.

Mark won the prestigious Medallion of Excellence for his skills display in the 4 day WorldSkills International Competition in Shizuoka, Japan 2007. His medal contributed to Australia’s world ranking of 5th place.

Where is Mark now?
Mark continues to work where he completed his apprenticeship and believes that, “giving back some time to my boss is important because he was so good to me during the training for the competitions.”

According to Mark, “the pace has changed a little since competing in Japan and returned to a normal pace as there wasn’t any training that had to be done and I have been trying to make up for some of the things that I couldn’t do when I was training.”

And in the next 12 months…
Over the next 12 months Mark could be looking at a job change “I would like to try something that will test out my skills again, get out there and meet some talented people. Who knows maybe travel other countries as well for work.”

A few words for the Competitors of Team Australia, Calgary 2009
“If you aren’t sure of anything make sure you ask your expert, if they don’t know the answer they probably will know someone who will, and have fun.”