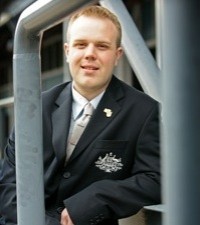 Matthew is from the Sydney region, New South Wales. He currently works at Art Attack Web and Graphic Design while studying at University of Technology, Sydney. The Web Design expert was David Summerville from OzWeb Design.

Matthew has always had an interest in computers and web design and was able to teach himself the basics as he went along. He then gained employment at Art Attack Web and Graphic Design where he could use and extends his knowledge and skills. After several months of working Matthew decided to gain some formal training and a qualification. He undertook the Certificate IV Web Design followed by the Diploma in Web Development in the IT Section at Hornsby College of TAFE. During his time at Hornsby TAFE he was introduced to WorldSkills competitions, and won the Regional competition, then the National Competition the following year.

Matthew says that winning a national gold medal in web design and then competing internationally have been his biggest achievements to date, but he doesn’t want to stop there. As the industry is always changing and technology is constantly updating, Matthew is going to continue to learn about new methods and programs to maintain his edge as a web designer.

Matthew most enjoys being able to view and share the finished product that he has created. While there is the technical side of web design, Matthew can also use some creativity. In the long term, Matthew wants to run his own web design company and be his own boss.

With a Medallion of Excellence also now under his belt, there is no doubt Matthew will successfully achieve his long term goal. Matthew won the medal for his performance at the 2007 WorldSkills International Competition in Shizuoka, Japan.

Where is Matthew now?
“Since Japan I have continued to grow the business I started with a friend from high school a couple of months before leaving to Japan. We started a web and graphics design company called Rival Web Design and earlier this year moved our business into a proper office (previously we were located in a home office) enabling us to have clients visit and giving us an external workplace away from home.”

“Additionally, since returning from Japan I was offered a part time position teaching Web Design at Hornsby TAFE. At present, I am teaching about two days a week and as this is nearly the end of my first year teaching, I can say that I have really enjoyed it thus far and it has taught me a lot.”

“In July this year I was also lucky enough to help Judge the National competition and continue to help in the training and development of the next international competitor.”

“Since Japan I guess I have a lot more confidence in my skills, having have competed on an international scale. This has given me much needed confidence when talking to other industry experts and professionals and in general dealing with clients. It has made me even more confident in my skill set and the services that I offer.”

“Having competed internationally, I have also had the opportunity to benchmark the work that we do in Australia to that of work done overseas. I have made contacts though WorldSkills and to this day still keep in contact with some of the competitors from my category in Japan.”

And in the next 12 months…
“The next 12 months for me will be very busy. One of my main goals is to grow the business and take on some more employees, at which stage I will teach and develop them and hopefully pass on some of my knowledge and make them into professional, confident web designers and developers. Within the 12 month period, we are looking at trying to double our current client base and develop my skill in even more fields so that we will be able to offer a larger variety of services to our clients.”

“I would also like to continue to pass on my knowledge and remain teaching at TAFE with some of the other WorldSkills competitors from our region. Teaching at TAFE gives me another opportunity to continue my learning whilst passing on what I know to the students. In an industry that is constantly changing, it is great to have the extra incentive to keep learning and developing my skill set.”

A few words for the competitors of Team Australia, Calgary 2009
“If I could say one thing to Team Australia, Calgary 2009 it would be to give this opportunity you have been given everything you have got. It will be a lot of hard work for the next year training and fine tuning your skills, but the benefits, rewards and the feeling of representing your country on an international scale are definitely worth it in the end.”