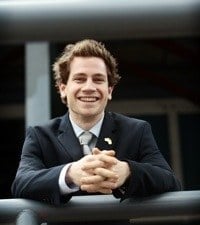 oel Drew is one of Australia%27s international silver medallists for the Jewellery category.

Joel is from the Melbourne region, Victoria. His employer is Ruby Tuesday Jewellery in Warrandyte and he trained at the Northern Melbourne Institute of TAFE in Fairfield. The Jewellery expert was Andrew Rose from Magenta Creative Jewellery in Eltham.

Joel%27s interest started in work experience in Year 10, where he was able to see the skills required for designing and manufacturing jewellery. While completing his VCE (Victorian Certificate of Education) in year 12, Joel continued pursuing his interest by working part time at Ruby Tuesday. Upon the completion of secondary school Joel began his apprenticeship and continues his employment at the jewellers.

During his first year as an apprentice Joel was named NMIT Apprentice of the Year and his success continued from there. His experience as a WorldSkills competitor has helped him to be recognised as a talented young jeweller.

He says that his mentors, employers, teachers and others around him have taught him so much and have been a great support network, and that he hopes to continue loving what he does to become a successful jeweller.