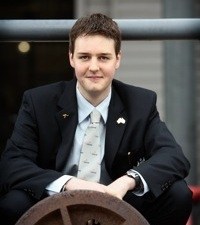 Michael is from the Sydney region, New South Wales. He is employed at To’s Newsagency in Hornsby and also trains at TAFE NSW in Hornsby. Michael trained with expert Caroline Hawkins, from the Northern Sydney Institute of TAFE.

Like many young Australians, Michael has always had an interest and great understanding of the computer industry. During schools Michael completed a Software Design and Development course for his HSC and began TAFE upon his completion. During his education Michael has conducted his own contracting work on the side.

Michael enjoys the constant challenges that are presented in I.T. and uses his skills to remedy them for clients. A highlight of his field is being able to create software that will help others to carry out their own work.

Michael says that WorldSkills has helped him to recognise his own potential and wants to leave his options open because of the overwhelming number of opportunities that are heading his way.

Michael received the prestigious international Medallion of Excellence after competing in the 4 day event at the WorldSkills International Competition in 2007.

Where is Michael now?
Michael has certainly been busy since competing in Japan. He has been studying full-time (Diploma in Web Development), teaching part-time (Hornsby TAFE) and also working part-time. He has also helped write the IT Software Applications Regional Competition and the IT Software Applications National Competition with Caroline Hawkins and was able to be a judge in both of those competitions.

“Competing in an International Competition is an experience that most people don’t get, so I feel very fortunate! Having this experience under your belt gives you a much greater confidence in your abilities to perform at your best in the workplace. I’ve now been given the opportunity to design and judge competitions at both Regional and National levels and am now teaching at Hornsby TAFE. Without partaking in the WorldSkills competition in Japan, I would most likely have not had any of these opportunities.”

Michael says he is now at the stage of considering full-time work while continuing to teach part-time and said there are quite a few different areas of IT that he could move into. The next 12 months should definitely be interesting!”

A few words for the competitors of Team Australia, Calgary 2009
“This competition is a fantastic experience, and is sure to benefit you both personally and professionally! Make sure you give it your best, the last thing that you want is to finish the competition thinking that you could’ve put in more effort but remember to stay calm and enjoy the ride.”