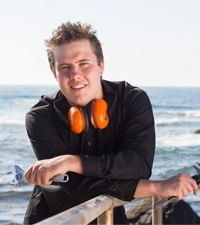 “Being a part WorldSkills Australia is a great opportunity to showcase your technical skills whilst also developing teamwork skills. It also gives you the chance to meet new people from the same industry.”

Mathew became involved in the fitting and turning industry after receiving some valuable advice from family and friends who believed he would be suited to the trade. Taking these recommendations on board, Mathew read up on the profession and made the decision to begin actively seeking an apprenticeship. It didn’t take long for this hard working young man to secure himself employment, when C & M Luessink Engineering met Mathew they quickly spotted his evident talent and offered him an apprenticeship. Mathew has been with the company ever since.

He enjoys hands on learning and notes working in a team as one of the best aspects of his job, a critical skill he displayed in the lead up to the competition as he trained and competed alongside his two teammates who were also selected to represent Australia in the Manufacturing Team Challenge category at the 42nd WorldSkills International Competition in Leipzig, Germany.

Describe your experience representing Australia in Germany…
“The WorldSkills competition was very exciting and something I will never forget, I absolutely loved the challenge, and although we did not get the desired gold medal we were after at completion, this was a massive learning curve and I’m sure my team mates will also agree with me about the feeling of accomplishment that we gave a hundred percent and never gave up. My team mates and I were all very proud to represent Australia. WorldSkills has taught me so much about myself and has enhanced a variety of my skills which include but are not limited to teamwork, communication, self-determination and workmanship.”

Brent is a toolmaker at the Research School of Earth Sciences at the Australian National University. Brent won a gold medal at the
2005 WorldSkills International Competition in Helsinki as a member of the Manufacturing Team Challenge category. He has also acted in Judge and Chief Judge roles at the 2008 and 2012 WSA National Competitions. Brent’s first international judging role
came in 2009 where he was given the position as Expert in Calgary, Canada. Brent was then promoted to the role of Chief Expert for the 2011 International Competition, a position he will again hold in 2013 in Leipzig, Germany. As Expert of MTC, Brent’s aim is to help the three MTC competitors reach their full potential. His advice to his team is, “work hard during your preparation and training, it’s amazing how quickly the competition will come around.”