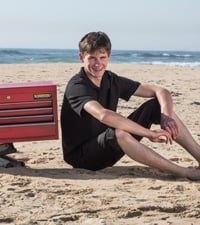 “Participating in WorldSkills competitions is definitely a positive experience. It really opens up your eyes to the potential pathways available within your trade. It showcases to potential employers that you are an active and enthusiastic tradesperson.”

Timothy (Tim) Taylor grew up around cars and motorbikes. His father, a mechanic by trade, encouraged his interest from an early age. During his year 9 studies, Tim found a part-time job working at a garage after school. Once he completed year 10, the garage offered him an apprenticeship, which he gladly accepted.

When he’s not working on cars, Tim is at university, studying mechanical engineering part-time. He loves all things mechanical and his passion for continual learning has only aided his development and training, “what I enjoy most about my job is the fault finding and problem solving aspect…solving a problem with a vehicle means learning how the system works and how it influences the performance of a vehicle, it’s always a bit of fun,” said Tim.

Competing in Leipzig was a longstanding goal for Tim, “I have wanted to compete internationally ever since I placed second in my first WSA National Competition in 2010. It is something that I am really passionate about.”

Due to Tim’s age, he was able to progress through two WorldSkills Australia competition cycles. His silver medal in 2010 only increased his determination to succeed in Sydney.